Our Blood Pressures are Fine 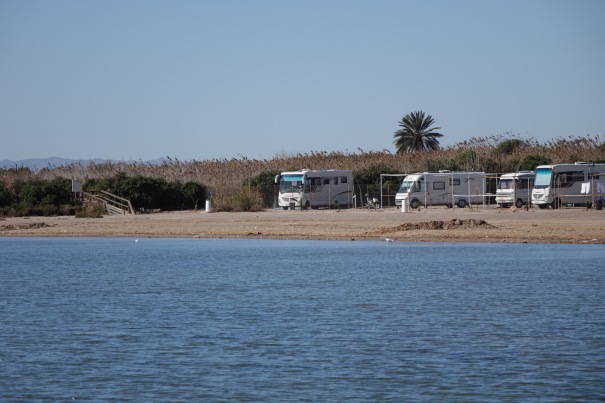 This is our pitch at Mar Menor….Mavis is parked on the left, in a front corner next to a section of nature reserve which separates the campsite from the town of Los Alcázares.

This is the boardwalk through the nature reserve to Los Alcázares.

At the far end of the beach from us is the restaurant, the ‘Thai Beach’. Opposite the restaurant is this jetty which runs out in to the Mar Menor….I’m the hombre at the end.
The restaurant is open at weekends only at the moment. It is run by a nice Spanish guy called Peter, a physiotherapist, who arranges free paella every Sunday lunchtime.

Quirkily, he also provides free blood pressure and blood sugar checks every Tuesday for those who want them. Don’t get it checked after one of the chocolate croissants that Tomas, from the local panaderia, hawks around the site every morning.

We did go along for a check up, just for fun, and met Peter, who is charming. He invited us to come along early to the Sunday paella feast so we could see how it was made.

Last Tuesday we biked north along the coast to San Pedro del Pinatar, where there is a long cycle track out along a strip of land separating the Mar Menor from the Mediterranean. At first there are Salinas…salt pans..to the left and then, about 4 miles out, the track reaches the sea.

Causeway out to the Mediterranean

The buildings in the distance are on La Manga Strip..the other side of the horseshoe seaward side of the Mar Menor lagoon.

There is much birdlife here.

We have made friends with Mike and Marilyn, a lovely couple from Grimsby who are also staying here, along with their chihuahua, Acer. We had a drink or three with them when we returned from the trip to San Pedro.

After a bit of a walk around the airport and nature reserve the next day (anyone recognise the plane spotter on the right?) we had lunch back on the site. 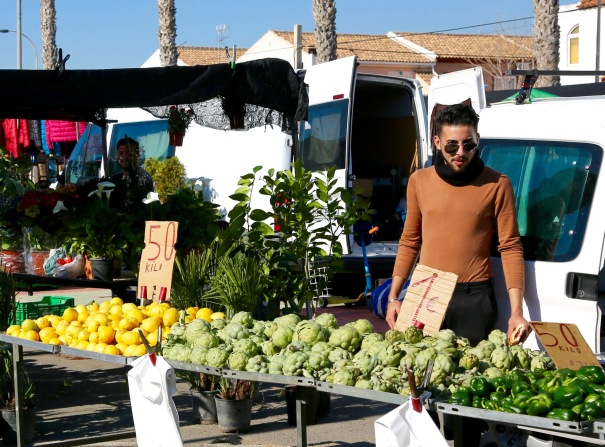 On Saturday morning we biked up to the market in Los Narejos, about a mile away. It’s difficult to resist the crazy prices and we stocked up with lemons…50 cents a kilo, potatoes two kilos a euro and so on.

After the market we walked in to Los Alcázares for a wine and tapas late lunch at La Encarnacion…the old spa hotel restaurant we like at the far and of the promenade.

On Sunday morning we had a long coffee break with Steve and Pat, new friends we have made from Kent, who are enjoying retirement cruising around Europe. They have taught us a great way to improve our Spanish…tune in to ‘Boom’, a Spanish TV quiz show. 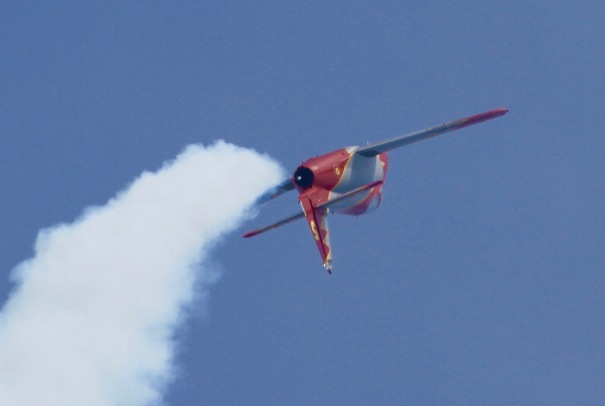 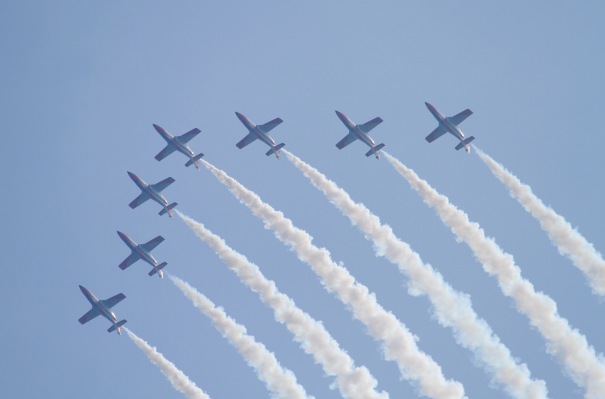 Tuesday was my birthday and the Spanish air Force kindly put on a display to mark the occasion. Nia said she had to ‘phone the control tower to request a display but I don’t believe her. I’m sure they already knew it was my birthday.

The next day we cycled in to San Javier which is a small town about two miles inland. 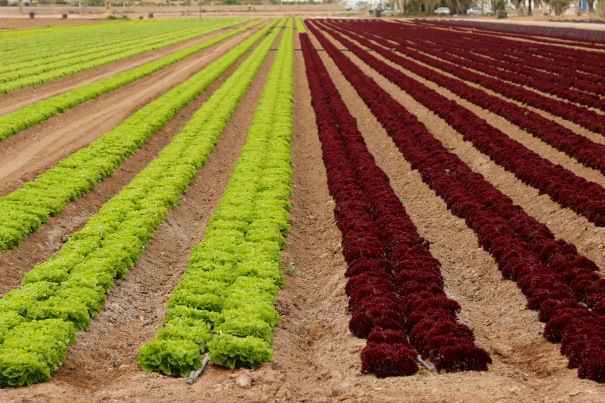 We cycled though a lettuce farm and spotted a Hoopoe but not quickly enough to snap it. 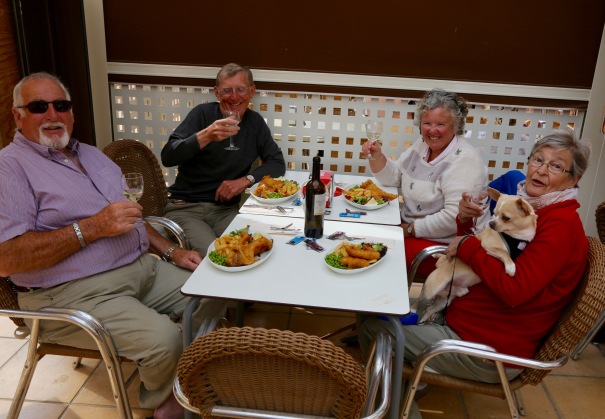 A couple of days ago we cycled in to Los Alcázares and met Mike and Marilyn for a fish and chip lunch at the ‘Penny Farthing’. Not very Spanish I know but we did wash it down with some nice Spanish wine. And the fish was delicious.

8 comments on “Our Blood Pressures are Fine”