We spent a couple of days travelling down France, stopping at aires near Orleans and then in the Auvergne, then arrived at the medieval walled town of Aigues-Mortes, on the edge of the Camargue, in Provence.

We camped in the aire/car park just on the edge of the town. 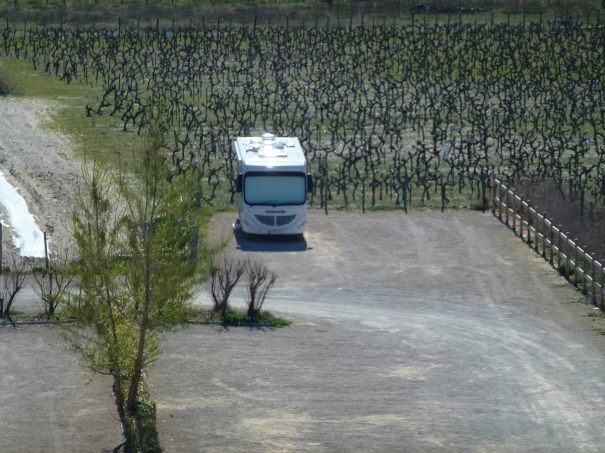 View of Mavis from the ramparts, almost on our own by the morning ‘tho it was quite a busy car-park when we arrived on Sunday afternoon. 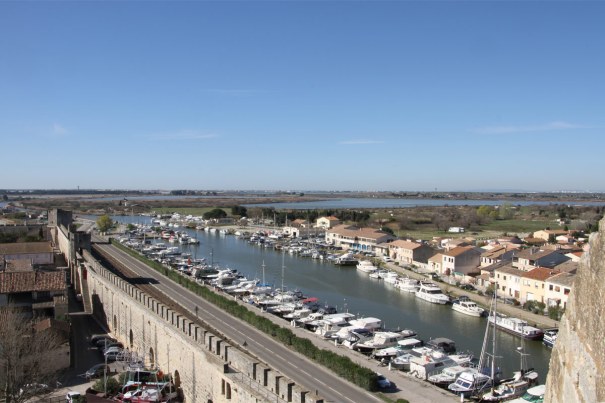 Aigues-Mortes is surrounded by water on three sides and gained its name from the stagnant, or dead, waters where it was built, in the times when the Camargue was a collection of swamps and marshes.

The town is of historical interest because it was the port from which Louis IXth, better known as Saint Louis, set sail for the 7th and 8th crusades. He was to die of disease shortly after disembarking in Tunisia in 1270.

Nia and Colin enjoying a rest in the Place St Louis.

Tower at one corner of the town..the walls and towers are all very well preserved.

Aigues-Mortes at night. We had a lovely meal at one of the restaurants just off the Place St Louis.

Lion guarding one of the gate towers. Why is he winking?

View looking to the South, over the Etang du Roi, from the ramparts. The white hills in the background are piles of salt, still a major industry here. In the past the area was ruled by the monks of Psalmody Abbey, who became wealthy from the sale of the salt harvested here by evaporation.

The Burgundy tower in one corner of the town. Apparently the bodies of the Burgundian garrison killed in some long ago feud were salted down here.

We moved on to Saintes Maries de la Mer, on the southern tip of the Camargue. It is packed with birdlife making the most of the extensive salt-pans and lakes. 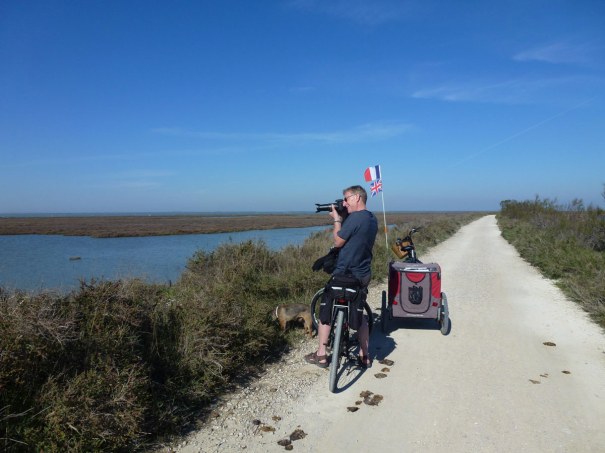 There is a long cycle ride along the dike to the east of Stes Maries. 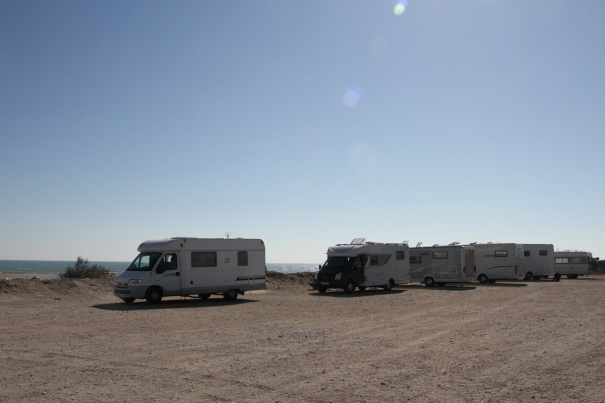 Camped on the beach at Stes Maries, overlooking the Mediterranean.

The church at Stes Maries, catching the morning light.
A minor problem has arisen back in Cumbria, so we are now wending are way back up through France to return home for a few weeks…we will return to Provence at some stage.