We took the bus from La Campiña to Cordoba (€4 each, 45 minutes) while Rick very kindly looked after the Kray twins. 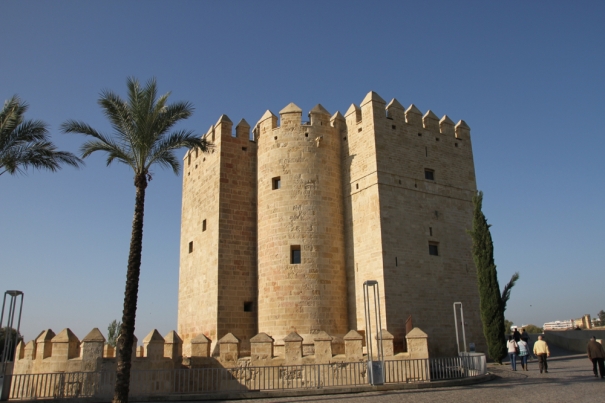 Time was limited so we took a taxi from the bus station to the Calahorrra tower, which lies to the south of the River Guadalquivir. The tower is directly across the Roman Bridge from the Mezquita-Cathedral, the cathedral within a mosque which is one of the buildings for which Córdoba is famous.

The tower was built by Henry II, who we had met earlier in the tour when we lunched with Alan and Joy overlooking his birthplace in Le Mans. 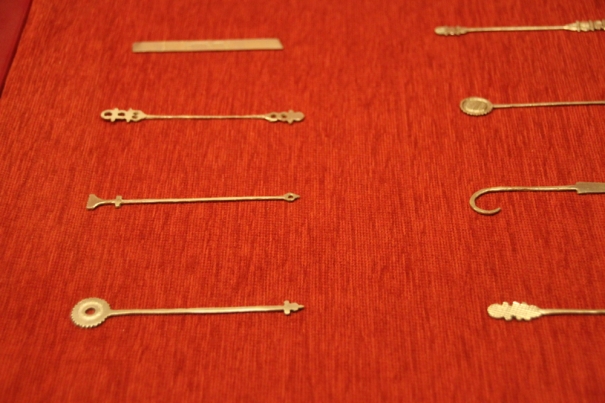 There is a good museum inside the tower, established by the ‘Foundation of Dialogue Among Cultures’ and showing the time of the tolerant Córdoba of the Caliphate, when Moors, Christians and Jews lived peacefully together. For many centuries Córdoba was a great intellectual and scientific centre. In Roman times great poets and philosophers including Seneca and Lucano lived here.
It was under Moorish domination, after 929, when an independent caliphate was declared, that Córdoba became one of the most important cultural centres in the west. The city housed a famous university, libraries and much sumptuous architecture, some of which has survived. 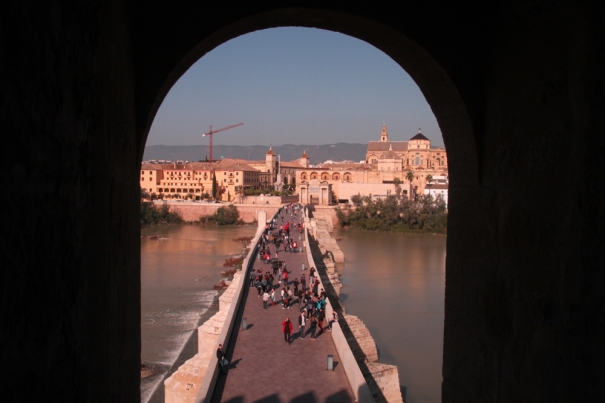 From the Calahorra tower there are good views across the Roman Bridge (modernised but with Roman foundations) to the Mezquita and old city. 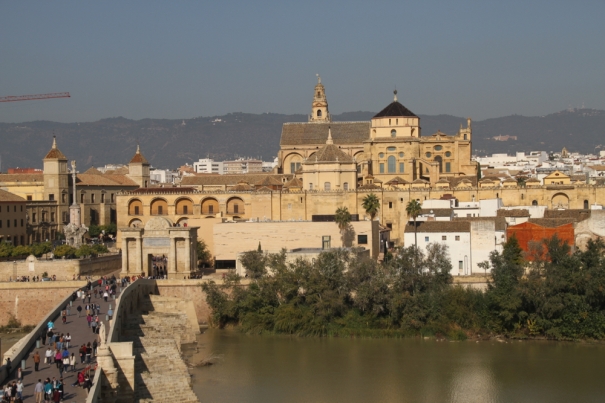 The mosque in Córdoba, covering 24,000 square metres, is the largest in the Western world. 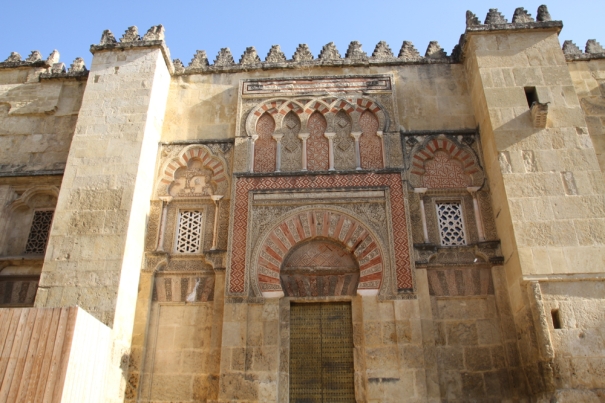 Mosque Doorway on West Side

The imposing mosque walls are studded with square turrets and contain many ornate gates. 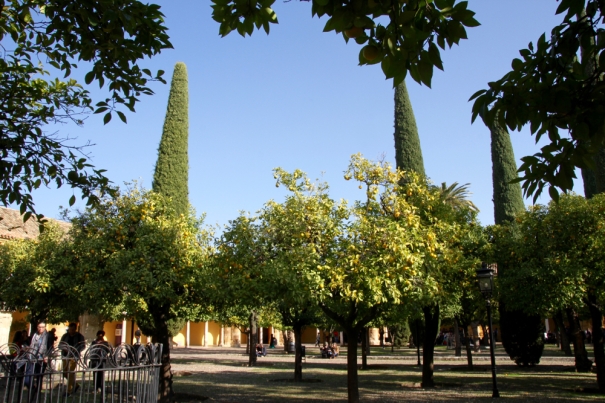 To the west of the mosque is a garden planted with a grid of oranges, cunningly kept watered by a grid of rills or water channels running from tree to tree. In Moorish times the faithful washed here before entering the mosque. 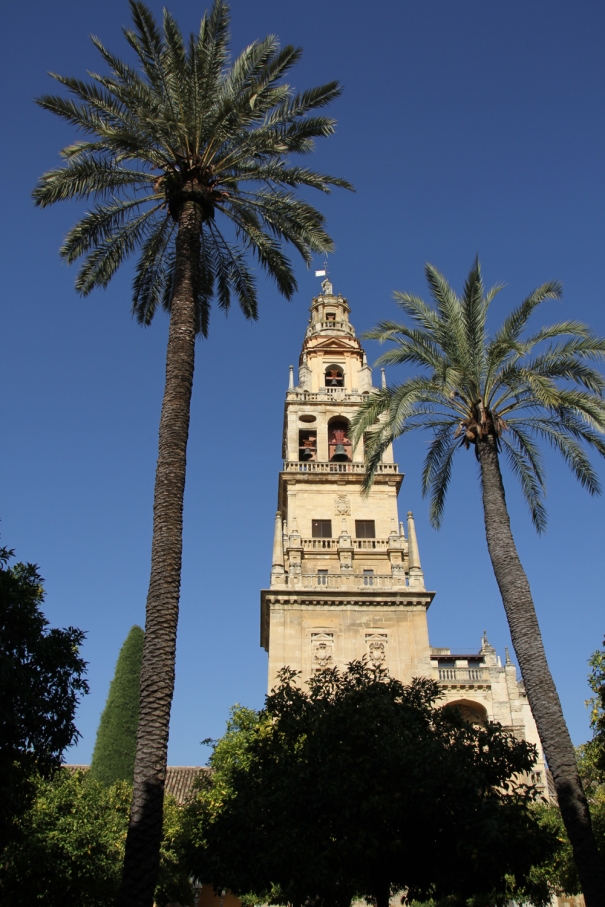 In 1236 Córdoba was reconquered by the Christian armies of Ferdinand the Holy and over subsequent centuries a cathedral and bell tower was built within the mosque, preserving much of the original Moorish building. 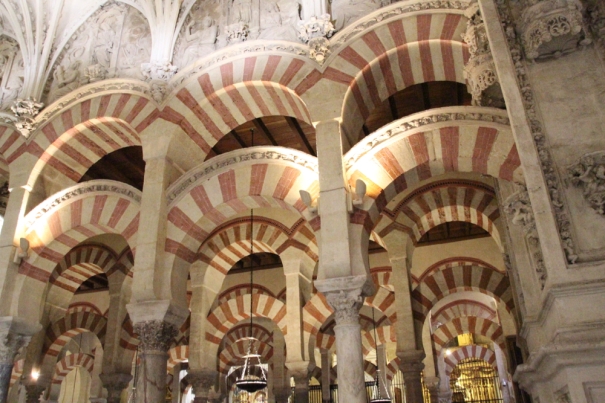 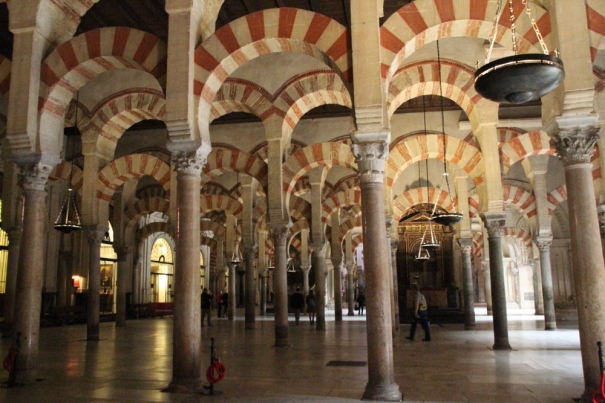 Aisles and Archways in the original Mosque

The mosque was started by Abd-ar-Rahman I in 786. There is a stunning interior of bi-colour arches on two levels. The columns were pinched from Visigoth and Roman buildings in Spain, Europe and North Africa, making the mosque a museum of first millennium architecture. 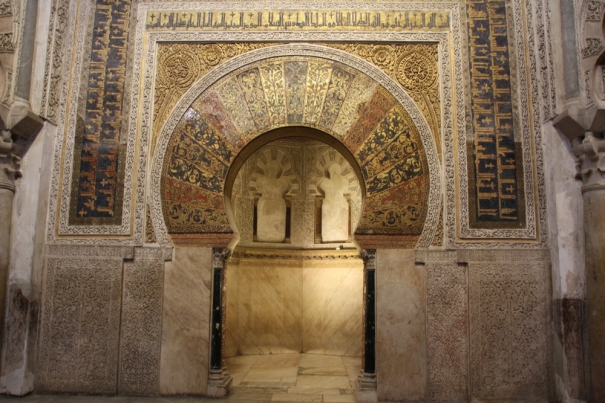 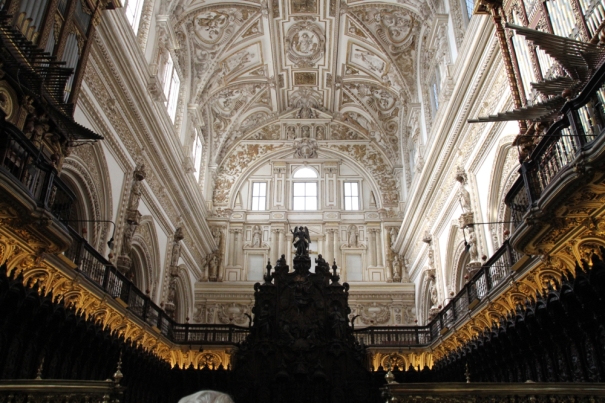 A sumptuous cathedral has been built within the mosque, which was consecrated and named Santa Maria la Mayor a few weeks after the conquest by Ferdinand the Holy in 1236. Up to the 16th century, further additions and changes to the architecture were made; cathedral construction began in 1523. 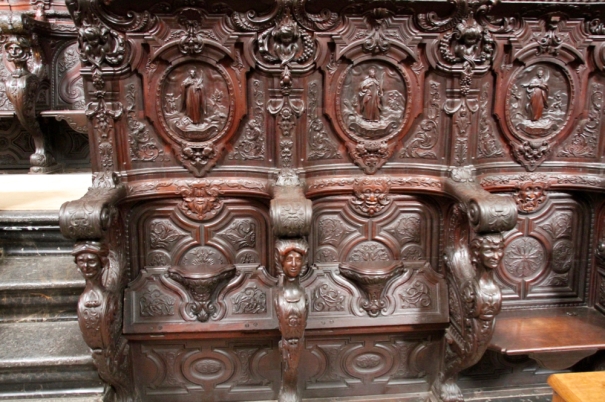 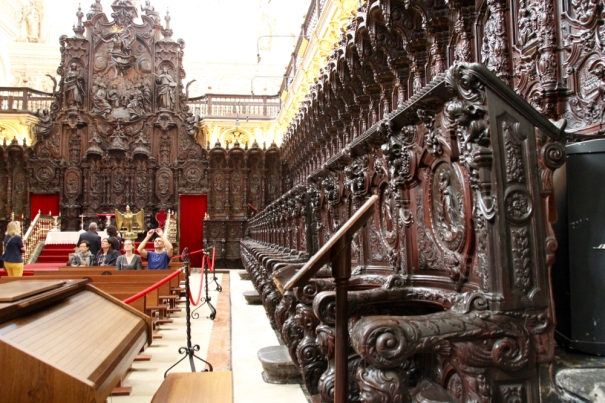 The seats have been carved in Antilles mahogany and feature scenes from the Bible and the lives of various Córdoban martyrs.

There is a massive organ within the cathedral and we were treated to a stunning rendition of Bach’s Toccata and Fugue in D minor while we were there.

After the cathedral we moved to the Jewish quarter for a tapas lunch, then walked back to the bus station. There is much more to see in Córdoba and we are planning to return.