Buoyed up financially by an unexpected second place in the quiz night in the campsite bar ( what English word has 6 a’s?, What is a clanky?, Is Fidel Castro still alive?……) we won €2 and I ventured in to Almeria airport and hired a car for a week.

First stop on our motorised tour of the peninsula was Cabo de Gata lighthouse. We had tried to get up here on our bikes a couple of days ago, and almost made it, but were defeated when the near vertical up gradient became single track, with blind bends…we bottled out. Easy in a car though.

The lighthouse is built on a chunk of volcanic rock.

This is the view looking East.

We retraced our steps…both our maps showed that we could continue around the headland, but this did seem to involve driving over a cliff, so we did a U turn instead. We had lunch by this restored windmill in El Pozo de Los Frailes.

Next stop San Jose….a small coastal village with loads of bars and a harbour full of very smart boats. We met a young French couple, disembarking, and, unless my French is worse than I think, I’m pretty sure he offered to trade his kids for our dogs. Must have been a long passage….

We moved up the coast to Los Escullos and walked up past El Castillo de San Felipe, built as a coastal defence around 1800. 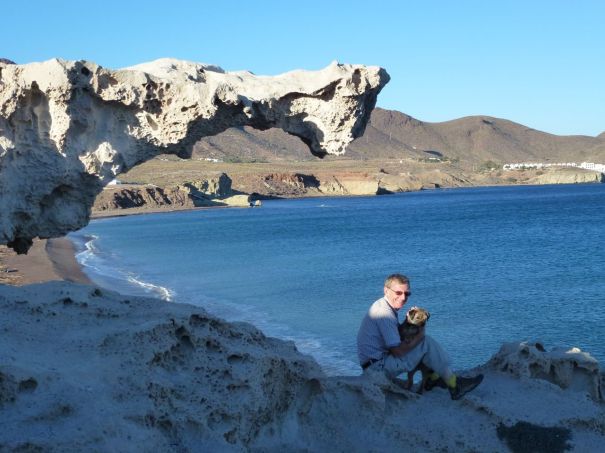 There are some weird, partially weather eroded volcanic formations here. There are a number of very descriptive boards dotted about, explaining how everything formed, but not in understandable spanish (to us).

There is a good light on the cliffs, as evening falls.